I think the interest for an extremely expensive break like I proposed would be counterproductive....in the end, the cost would be prohibitive.  But I still want to do a high-end break, so this is what I'm proposing....

This would amount to 40 hits for the break without any filler.  I will also add a random box (not yet decided) of recent vintage that has mostly base/insert cards for your favorite team and more.   All box breaks will be videoed and it will be a draft style break.  What I'm proposing is have everyone be 4 slots....randomize the 40 slots

I'm looking for anywhere from 10-15 participants and that will really influence the price.   A guesstimate is with 10 participants, it will cost 60-65 for a slot.....that will get you 4 hits, including a 1:5 chance at a 1/1 cut auto+stuff from the bonus box.  I've attached the products' information at the bottom of the post for you to peruse.

Just trying to liven up the season...as the Phillies fail to average 3 runs/game.....

Please leave your interest in the comments....or if you have an idea for reconfiguring the number of boxes...or if you have a favorite of these products that you would like to see more of....all feedback is good feedback.


This last minute surprise product from LEAF is our thank you for a year of great support!
We are excited to present 2011 LEAF INK BASEBALL. This release features an incredible combination of VINTAGE BUYBACK SIGNED CARDS and LEAF INK 1/1 CUTS.


With a 1 of 1 cut signature card and 4 vintage signed cards in every single pack, we are certain INK Baseball will be the perfect end to 2011.

Leaf is excited to bring the hobby one of its most beloved technologies long forgotten since the 1990's. Leaf Valiant features not only the 2011 draft's most exciting players, but numerous popular prospects who have been eagerly awaiting their opportunity to make their first trading card autograph appearance. Leaf is please to announce that ALL autographs for this exciting release are on-card.

As a fantastic value added for this product, Leaf has signed one of Baseball's biggest stars to sign autographs for this set, ICHIRO SUZUKI! It is well known in hobby circles that ICHIRO has not signed for any card company in over 6 years, and LEAF HAS LANDED THIS HIGHLY ELUSIVE MEGASTAR!!!!!

I've been thinking there hasn't been much external participation on this blog in awhile. (My last group break and contest were about a year ago). That, and my general inactivity, has led to some non-interactive content.....

I was thinking about a crazy group break idea (hence the title of the post). What about a draft-style group break of a case of 2010 Panini Century Collection? There are 15 boxes per case with 5 cards per pack (75 cards in total). Each card is a relic or auto. Granted, some of them are relics of hollywood celebrities and astronauts.

So I was thinking to group the boxes together in groups of 5 randomly....video those 5 box openings, list the cards, and have the participants draft the cards snake-style and then repeat for the other two groups of 5 boxes. I say groups of 5 because there is one encased hit per box...(check out the box break I just had in the near future) that is generally perceived as better than the rest.

I don't know the cost yet (depending on the case price I can negotiate) because I just had the idea, but I would need 3-5 people to make it work. I will also add some other stuff to make the numbers work if there's more people with interest. 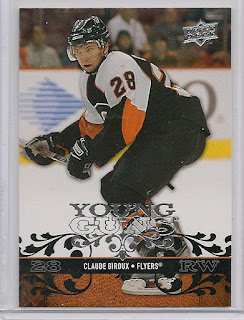 Hockey interlude on this night because of one of the most exciting couple of games I've seen (not that I'm biased)....Phillies and baseball programming will resume shortly

Claude Giroux, the marvel, who set a Flyers playoff hockey record with 6 points (3 goals and 3 assists). His 3 goals were all of different varieties: power play, short handed, and even strength (with an empty net, but still)....His first two goals were the comeback for the first and steepest uphill climb.

After being down 3-1 after the first period, including a deflating goal scored with 18 seconds to go, Giroux asserted dominance in controlling the puck, during the second period and beyond. He is a visionary passer, and it was special to watch. He's also usually on a line with the seemingly ageless Jaromir Jagr (who scored the game winning 6th goal), and the tenacious Scott Hartnell, and the three were not denied on this night.

Giroux may not have been the best Flyer on the ice either. That was probably 19 year old Sean Couturier, who was seemingly in the right place at the right time a lot to score all his goals on rebounds or scrambles or redirections. He notched the first hat trick by a rookie Flyer since Andy Delmore in 2000. He also seemed to win faceoffs all the time.

The game was a wild affair, and showcased two teams with incredible firepower. The series is not over and the Flyers can not rest, and especially have to stop giving up 3 goals in the first period like they have in the first two games in the series.

This is the Young Gun rookie of Giroux, the only hockey card single I have ever sought to buy on its own. I consider it a showcase piece as a Philadelphia Flyers fan. He finished 3rd in the NHL in points this year and has shown himself through talent and know-how to be a foundational piece of the franchise. Another example was his diving stop at the blue line in the 1st game of the series which led directly to the tying goal during the Flyers' only power play.

I am giddy on this night, but wary of the Penguins' talent for the rest of the series. It's just too bad two of the top three teams in the Eastern Conference have to face each other in the 1st round due to the NHL seeding rules. Go Flyers!
Posted by Dan at 12:15:00 AM No comments: Links to this post

Peeking into a Corner of the 2012 Heritage Universe

I am not a Heritage collector, but I do collect Heritage cards....does this make sense? In other words, I don't think I would ever consciously go after the set in a given year because it would probably entail buying a case or more and that's not how I roll.   (On a deja vu note, I've probably written variations of that sentence at least once each year since 2009).  And yet I dabble, maybe that's what blasters should be called, dabbling boxes....they're almost like opening a full box, but don't have quite the same feel.

Did you know that you can get a hobby box now for less price than 3 blasters?  The lesson, as always, retail is only good for 2010 Bowman, 2011 Gypsy Queen, and 2011 Topps Value Boxes.  Below are the highlights of my first blaster purchase since 2009 Topps series 1 in search of the Target parallels.  I prefer rack packs with the bonus pack of three cards rather than the "7 packs with 1 pack bonus!" that isn't a bonus pack, but just states that it's a complete blaster with 8 packs and has no additional bonus (exceptions do exist) 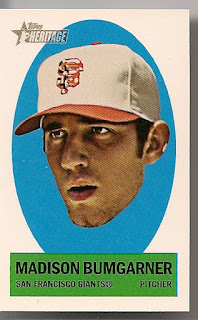 The hypnotized face of a mini sticker of Madison Bumgarner...One thing I appreciate about Heritage the last few years has been the inclusion of one insert set beyond the usual assortment.  2010 had the Ruth/Maris home run chase subset and last year had something else which I'm drawing a blank on... 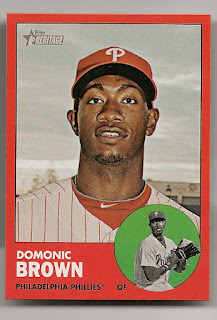 Domonic Brown as a red-bordered Phillie.  These are a semi-useless parallel since there's only 25 of them, but there's 25 for each of the major retail outlets.  Regardless, I was happy to pull a Phillie, even if he's an Iron Pig to start the year.

The other interesting part of Heritage is that they really try hard to fit players in their new uniforms....for well-known players at least. 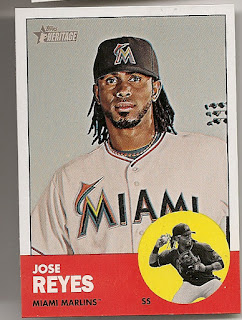 Jose Reyes pretending to like the M on his new jersey. 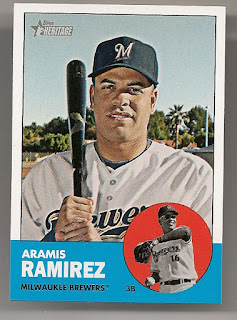 Aramis Ramirez happy to get away from the talk of curses and to a place where there's a slide in the outfield, and he may not have had to change houses to do so. 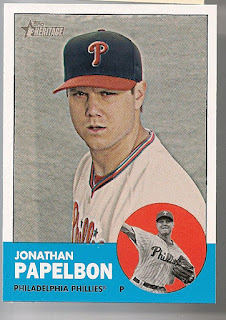 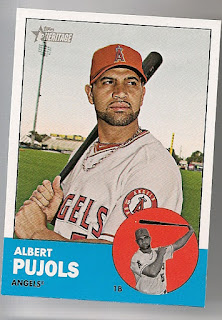 And of course, the most noted change of the offseason. Is there still interest in the SP card from 2012 Topps series 1? As with many things in the hobby, good things come to those who wait, except if you wait too long, in which case, they don't come at all. 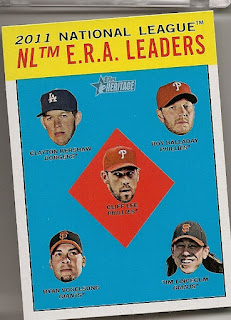 Other quirks were picked up from the original set like floating heads.  Cliff Lee is certain that Tim Lincecum is laughing at him because of that time when...nothing really happened, it's just weird how stoic every other head is on the card.  As the position of power (3rd place in ERA with the red diamond), every other head wants the center spot (I think this is where jet lag is starting to show).

And then there were the normal inserts.... 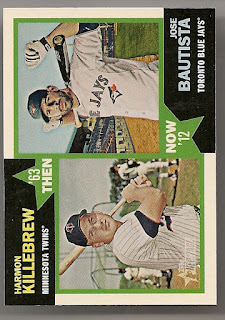 Then N Now starring Killebrew and Bautista, fellow back to back HR champs. 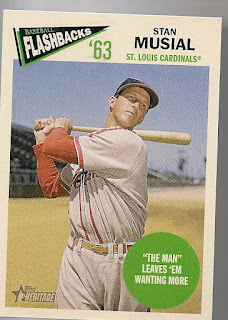 And a baseball flashback showing the retirement of Musial.  Did you know he had the same number of hits both home and away for his career (1815 hits apiece)?

So ends my 2012 Heritage sojourn....oddly enough, I'm more amped about the hockey playoffs right now rather than the beginning of baseball season.  What does that mean for the course of human events?  Only that Roy Halladay got the small screen, while the Flyers got the big screen...epic.