World Series Team Cards from Past and Present: Which Ghosts will Continue?

At the time of this writing, the Cleveland Indians lead the Chicago Cubs in the best of 7 2016 World Series 3-1.  On the back of really strong pitching and timely hitting, Cleveland is serving notice that their time in the baseball championship wilderness might be over.

For a World Series match-up such as this, the past weighs heavily on the participants with experiences, both heartbreaking and joyous, dating back the 1940s.  Let's examine some of the participants of those historic events. 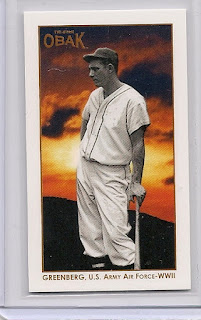 The backdrop of the 1945 World Series was the end of World War II.  Many veterans had started returning to their teams at the end of the season.  One of the most prominent was Hank Greenberg, the power-hitting first baseman of the Detroit Tigers, who returned in July of 1945. after nearly 4.5 years off due to military service.  On the first game of his return, he smashed a home run and did not look back, hitting for a .948 OPS with 13 HR in 78 games.  In the World Series, he led the Tigers in OPS, HR, RBI, tied for the lead in runs, and was 2nd in hits. 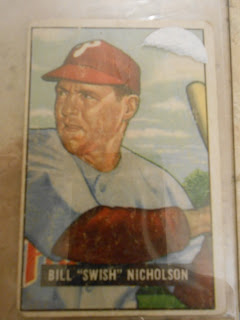 Bill Nicholson was the greatest power threat on the 1945 Cubs, hitting 13 HR, which was a downgrade from his previous 5 seasons of hitting 21-33 HR.  He had been supplanted as statistical team leader by league MVP Phil Cavarretta and flanked by long-time Cub, Stan Hack, and young gun, Andy Pafko.  Nicholson had 8 RBIs in the 1945 World Series, but had not much else to show for them as the Cubs fell in game 7 to the Tigers by the count of 9-3. 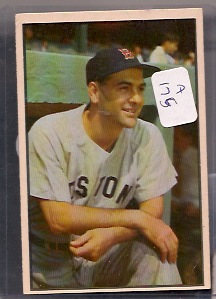 The Cleveland Indians were led to their last championship in 1948 by 30 year old player-manager MVP, Lou Boudreau.  A 7 time All-Star in his career, he had a career year in that year with highs in OBP, SLG, OPS, HR, RBI, Hits, and Runs.  This herculean effort only allowed for a tie for the AL lead with the Boston Red Sox.  The Indians advanced to the World Series in a 1 game playoff (the first and only playoff in the AL in the pre-division era.  Strangely, the NL had different rules for playoffs with a best of 3 system as evidenced by the Giants/Dodgers clashes of 1951 and 1962).  In the World Series, they faced down the Boston Braves (of "Spahn and Sain and pray for rain" fame).  All they had to do was beat one of them to win the World Series, and they took two from the elite pair.  Boudreau played his part  in the series, with the 2nd highest OPS on the team. 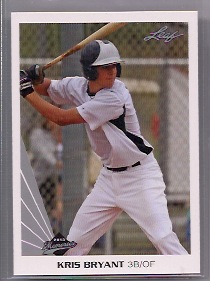 Who will emerge as the hero of this year as the World Series reaches its interminable finale?  Will someone become another paragraph in the annals of baseball history as these franchises jostle for championship position?  Bryant could be Boudreau or Hal Newhouser (1945 Tigers) with an MVP/title combo, but he could also be Phil Cavarretta, an MVP with only another belated shrug of "wait 'til next year".

The 2015 Diamond King set (manufactured by Panini) had an interesting checklist because they could freely mix retired players and current players without the MLB license.  The checklist has 200 cards (the last 50 are rookies) with some interesting, not oft-used names like Bobby Murcer, Bobby Thomson, Bobby McGee (ok, that one's not real), Elston Howard, Roger Maris, Jim Gilliam, Carl Furillo.....and all other non-HOF players who ever played for the New York Giants, New York Yankees, or Brooklyn Dodgers.

In terms of presentation, each card has a quasi-impressionist background with a brush stroked enhanced player superimposed.  The feeling of rifling through the cards took me back to a time when I used to play with the easel canvas in 7th grade art class.  Seriously, these cards would be works of art if they had the full trappings of licensed cards.

Let's go through the highlights, lowlights, and other types of illumination possibilities that came from the box. 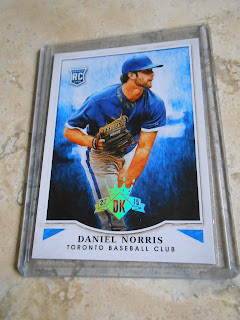 The game  for this card is what makes this a parallel?  The answer is the shiny logo in the middle.  There are so much better parallels in the product than this. 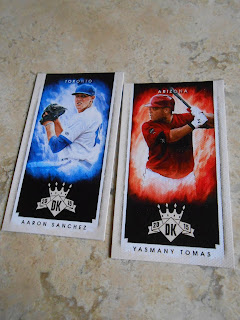 These minis only fall twice per box, which means they're more like afterthoughts in the product, though I do appreciate a good mini with a large crown. 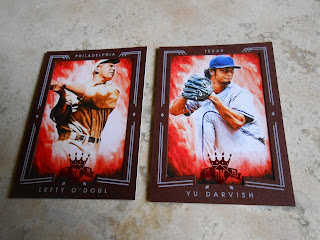 These framed parallels are what all the parallels should be (reminiscent of 2007-2008 UD Masterpieces).  I was happy to pull the O'Doul as both a Bay Area resident and Phillies collector. 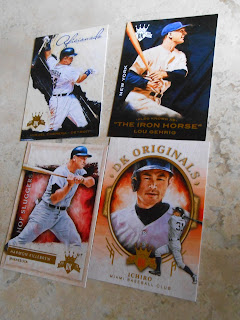 Here are examples of the standard inserts that each fall 2 per box.  Some are better than others.  My favorite is the "Also Known As" as represented by Lou Gehrig. 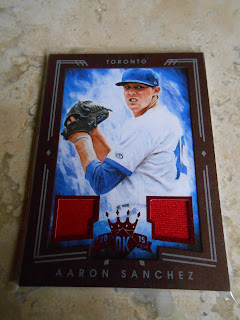 There were two "hits" per box.  One is a relic only, and one is an auto.  I pulled this Aaron Sanchez dual relic.  There are opportunities to pull HOF relics, though they are much rarer (usually #d to 99 or less). 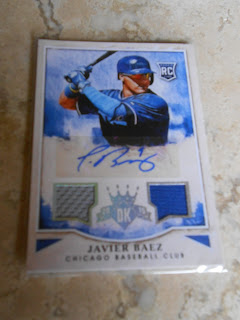 This was my auto pull of Javier Baez, the  newly minted co-MVP of the NLCS.    It's also a rookie card.

From the box, I received all the required cards that were promised and 82/200 cards of the base set.  Overall, I would recommend it at a lower price point (~$50-60 if you can find it) than originally offered (which was $90 per box) because of the variety of the base set and of the possibility of getting a HOF relic exists within the realm of possibility.    Plus, I like paintings.