Dreaming on the #1 Pick

With the MLB Draft come and gone, and Mickey Moniak having been selected, signed, and officially debuted in the rookie league the #1 pick is never a sure thing. In many years, there are consensus first picks (think Bryce Harper, Stephen Strasburg, Alex Rodriguez). In other years, the #2 picks surpass the #1 pick even before the ink has dried on the signing (think Joe Mauer, Kris Bryant). And in some other years, the gems are hidden depending on draft depth (Kershaw at #7 in 2006, Trout at #25 in 2009 (sidenote: did you know that the Angels had both the #24 and #25 picks that year and drafted Randal Grichuk directly before?))

There's always dreams that the #1 pick will become a Hall of Famer or multiple year all-star, but there is generally so much uncertainty in player development, that there is usually no clear path defined for that. The Phillies last foray into having the #1 pick was when they selected Pat Burrell in 1998. That worked out fairly well; only a few players have arguably had better careers from that first round (CC Sabathia) or flashed similar skills in a short time frame (Mark Mulder, JD Drew, Brad Lidge, Carlos Pena).

Which is to say, that the perceived success of this pick is not only predicated on the success of the Moniak as a player when he makes the big leagues, but also upon his relative performance to the other picks considered for his spot. We are a relativistic society after all. Here a couple #1 picks from the past that had different circumstances around their selection as depicted by 2009 obak auto cards and a nice ice parallel from 2012 Bowman that I pulled from packs. 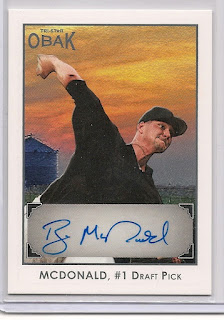 Ben McDonald was the #1 overall pick in the 1989 draft.  He was a star in the 1988 Olympics for the gold medal winning USA team and won the Golden Spikes award in 1989.  He made his major league debut in the September of 1989, weeks after signing.  He was a polished product and became a league average to very good starter from 1992-1997 until shoulder problems derailed and ended his career in 1997 at the age of 29.

Moniak is not really a comparison since he's at a different stage of development. 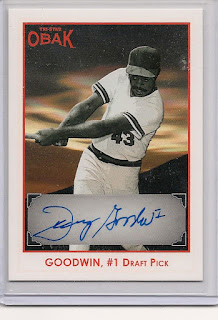 Danny Goodwin is an interesting case since he is the only player ever to be drafted #1 twice, in 1971 after finishing high school and 1975, after finishing college.  The potential is that he was a good-hitting catcher.  He eventually made the majors and ended up being only a part-time DH.  I haven't been able to find why the position conversion occurred (though even a conversion to 1B or OF would have made more sense to get value out of an asset).   He played from 1975-1982 in MLB without being able to break through to a regular starter.

Moniak also doesn't compare to Goodwin, though they both started from up the middle defensive positions.  Solid defense and a good bat from one of those positions makes for a valuable contributor to a team. 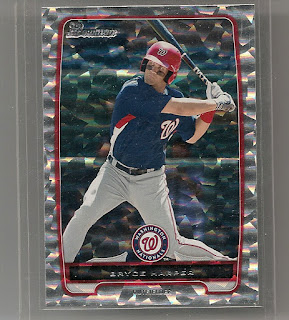 Bryce Harper (the #1 pick in 2011) we all know about since he's in the news all the time.  He has MVP level talent (he did win the  NL MVP in 2015), but has not consistently risen to that level season over season.  Even slumping, he's an all-star level outfielder; he needs more great seasons to reach this potential.  Of course, after almost five seasons, he's still only 23, younger than the ROY candidates from this year and last.

If Moniak could get to a level where he approaches Harper's down years (118 to 133 OPS+) for many years, that would be a win of a draft pick.  He's seems to be a multi-tool centerfielder with good contact skills at the outset, so there is hope.  It looks like we will see the progression by 2019.  That's a lot of time to dream.
Posted by Dan at 10:29:00 AM 1 comment: Links to this post 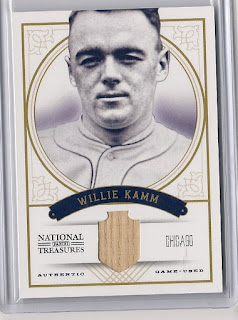 Lists, series, and countdowns are what build content in the online arena of words.  I tend to think in terms of patterns and lists, so sometimes there are no ways around it, a series must be born.

This series, in my opinion, will present a set of cards that not many people have all in one place.  The truth is not many people can have all of them since they're all numbered to 99 or less.

The particular focus is on players who have purported to not had a relic piece in a card before.  These have been all players from the past, some Hall of Famers, and some who are not always exalted among the historic pantheon of baseball players.

There is one set that introduced me to this concept, and it was the 2012 National Treasures set.  This set brought in a bevy of these old-time baseball players that had not been represented through a bat piece or jersey relic piece in previous sets.  There were also numerous other subjects of interest throughout the set.

Statistically, he was considered the best fielding 3B of his time.  He finished first in fielding % 8 times in his career and consistently ranked among the top 3 in range factor for a 3B.  He has the 8th most putouts all-time as a 3rd baseman and still holds the single season record for putouts.  He's also best known for pulling off the hidden ball trick twice in a season.