The Quest for the 1975 Topps Mini Phillies

Some people might agree with this statement, and some people might not. What that statement is, I'll never know. Besides that point, I have made it my unofficial quest to collect at least one version of all Phillies minis. This is not a goal to be taken lightly. They are titchy little buggers, prime to fall out of piles of cards in a mountain of disarray.

I may have to revise that goal after seeing the inclusion of chrome prospect minis in this year's Bowman edition. Fortunately, we all set the parameters of our own mini-collections within our collection. For this mini collection of minis, I hereby exclude thee Bowman minis! The vintage 1987 and 1972 mini inserts from Topps in 2012 and 2013 will count, however.

This post is about the progenitor of the mini brand, the 1975 Topps brand or as someone, who is the godfather of 1975 Topps, says MMMMMMMMMIIIIIINNNNNNNNNNIIIIIISSSSS!!

I will humbly go about the business of scooping up the Phillies and setting them along side their full sized versions to show that size does not matter in cards, only awesomeness.

Here are the latest arrivals.... 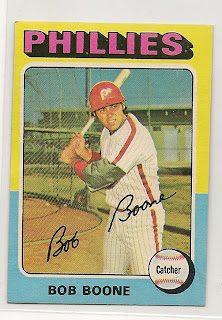 Bob Boone: He has shrunk on the card, but his helmet has not. 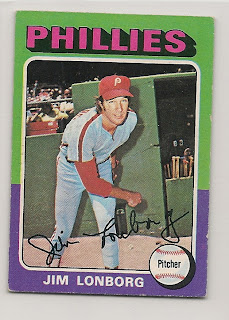 Jim Lonborg: Made the Veterans Stadium wall shrink with him. 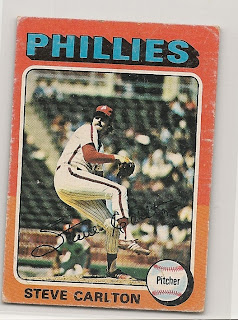 Steve Carlton:  I read this article about Carlton the other day.  It;s an old article from Philadelphia magazine.  It was illuminating.  Read it here. 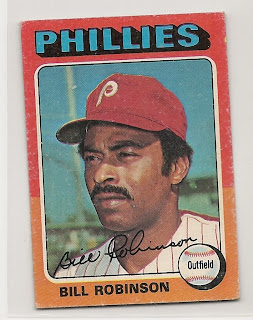 Bill Robinson : His mustache grew to reflect the disco era. 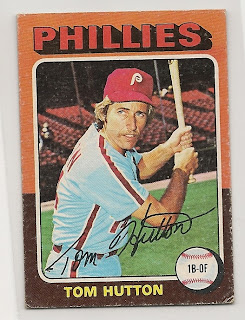 Tom Hutton:  He decided to shrink his K rate instead to show what a platoon player is all about.

Surprisingly, I only need 3 more cards for this particular team set (70, 312, 615)....this means that they've been sneaking into my collection for years.  But now they are properly captured.
Posted by Dan at 2:13:00 PM 2 comments: Links to this post 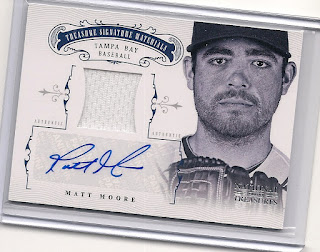 Saying this often is not common in this hobby, 2012 National Treasures cards have been a revelation. Yes, they are expensive.  Yes, they are unlicensed and have interesting hat placement to offset that.  On the converse, the checklist content is vast, varied, and actually left me surprised with the inclusions.  The real draw has been the vintage players of yore (pre-WWII), but it's kind of difficult to get an auto example of one of those players without significant coin.

In pursuit of an auto example from the National Treasures brand, I then decided to turn to the deep rookie/prospect class of 2012    There are numerous choices, led by Bryce Harper and Yu Darvish.  Those guys, though, have expensive autos.   I decided to then turn to a player with a significant pedigree, but I feel is slightly overlooked in the hobby as far as recognition compared to his peers, Matt Moore of the Rays.

He's been climbing the prospect list since his notice in 2010 until he hit a peak of #2 on the Baseball America list and #1 on the mlb.com list.    The reasons for his ascension can be traced to three numbers: 12.7 K/9, 3.3 K/BB, and 0.5 HR/9.  In addition, he had the splintering fastball hitting 97 with a wickedly spinning curveball and complementary change-up.   All these pitches have the potential to be commanded.

All the rookies in National Treasures are #/99.  It's a rare rookie at a bargain price for what the boxes cost.  I think he has the chance to be the next David Price or Felix Hernandez.
Posted by Dan at 4:06:00 PM 2 comments: Links to this post

I haven't been diligent enough in the unceasing opening of the packs this spring.  I've skipped over the usual suspects in pursuit of other collecting needs.  But like the pollen that inflames our bronchial tubes, it is a rite of spring that must be satiated, lest our collection dwindles and starts craving other more sinister pursuits to swell its ranks.

I ventured into the 2013 pack breaking era with a rack pack of the Heritage brand.  For 3 reasons:
1) My quota of hatless player cards was yet unfulfilled
2)The 3 black bordered cards that come with each rack pack.
3) The joy of playing "spot the airbrush"

Here are the highlights: 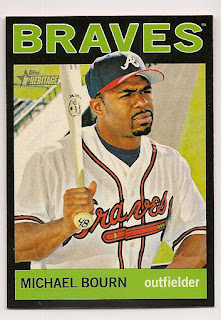 Michael Bourn black-bordered: He was not airbrushed into his new Indians uniform. 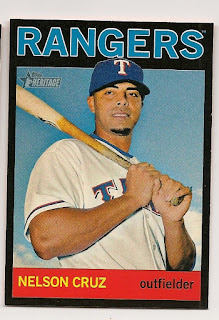 Nelson Cruz black-bordered: He's larger than life in the shadows. Seriously, is there a more anonymous member of the last two AL champions? 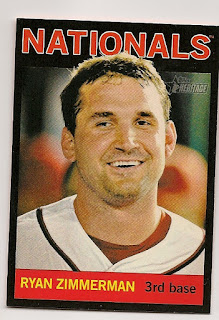 Ryan Zimmerman black-bordered: My hatless player quotient is now raised 100%; this pack has been a success. 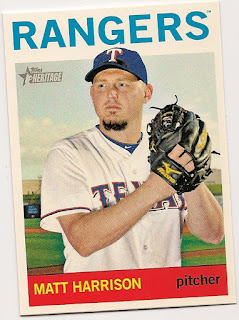 Matt Harrison SP: This is the joy and bane of collecting Heritage, short printed base cards.  He's also a Rangers pitcher that I bet you didn't know was an all-star in 2012. 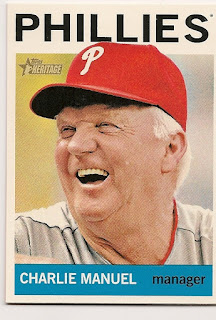 Charlie Manuel: Old Cholly is now the Phillies all-time winningest manager.  It's also the first Phillies Heritage card I have.  It's hard to laugh when playing so poorly though. 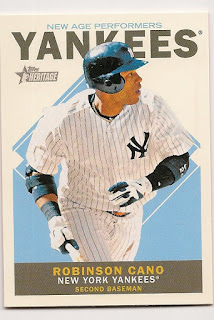 Robinson Cano New Age Performers: This insert set is always a must for completists.  I admit I never understood the theme though.  The design this year does not stand out from the base card. 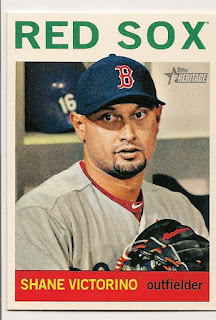 Shane Victorino: This is what Victorino looks like in an airbrushed Red Sox uniform.  What a strange look for him after so many years. 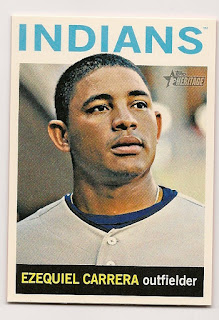 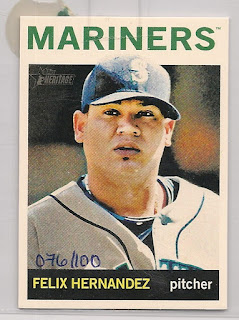 Felix Hernandez MINI!!: And as a great surprise, I pulled this 1:216 (or so) pack hand-numbered King Felix mini out of the final section of the rack pack.  Let's just call it an epic win. 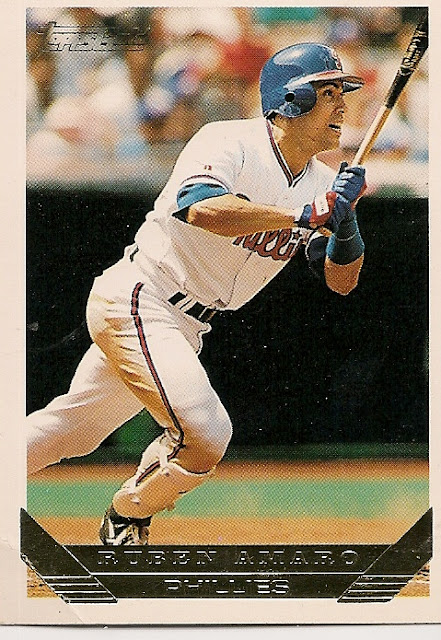 Here's the second and third slices of the 2013 season, which brings us to the end of April....what's the saying about April?  April showers bring May flowers....does that mean an under .500 April means a blazing, blooming May?  Let's hope there's no such thing as past results do not predict the future....1/6 of the way through this season, and this feels like a flawed, mediocre team that needs help or improvement from somewhere:

Record after 3 slices: 12-15
Record during these slices: 8-10
Teams that did damage: Pirates, Reds, Cardinals, Indians
Teams that crawled away: Mets, Marlins
Welcome to the Team, may your reputation be wrong: Delmon Young made his debut and hit a home run in his first at-bat.  Hopefully, that sets a trend.
Welcome to the team, young grasshopper: Jonathan Pettibone, has a respectable debut with 6 K and then earns his first MLB win in the next start.
Happy Trails:  To Humberto Quintero and Ezequiel Carrera, we hardly knew ye both, and they will join a long line of briefly tenured Phillies.
Is there a doctor in the house? John Lannan joins the walking wounded and goes on the DL; this is accounted for the curse of Chase Utley that he started three years ago.  Retribution occurs when he's on the team, of course.
Ask for a sinker, and I'll give you a boat with a hole: To Kyle Kendrick, who's succeeding by upping his GB% and K%, including a complete game shutout against the Mets.
Please don't be the start of a trend because that would cause panic: To Roy Halladay and the pitching staff for allowing 7 HRs in a loss to Cleveland 14-2 on 4/30
Worst Day of the Season So far: To April 17th: the game the day before was suspended due to rain, they lost in 9 pitches, and then got blown out 11-2 in the nightcap against those Reds.
Welcome Back, Chooch! : To Carlos Ruiz, who comes back from his suspension just in time, with Erik Kratz sporting a 44 OPS+, an improvement would be nigh impossible to secure from that batting spot.
Can I Get some 7th inning stretch support? To Mike Adams and Phillippe Aumont....and well, almost everyone else in the bullpen....sample size caveats aside....that's a lot of runs given up in the late stage of games, especially against the Pirates.
Remarkable Pitching Stat Negative Edition: Chad Durbin allowed his first seven inherited runners to score, and has now allowed 9 of 11 last I checked.  Is there anyone else in the league allowing greater than 50%.  Chad Durbin, I give you the Baez/Qualls Award for April.
Hitting for Average is a Skill: To Michael Young, had a 16 game hitting streak and is hitting .341, though has no power, at least it's a start.
Game of the Slice: Scoring 1 in the 7th and 4 in the 8th to defeat the Cardinals 7-3 on 4/21.
Pinch-hitting is like sleepwalking except with a bat: To Laynce Nix, who's hitting 7 for 13 with a 2 HR and a 1.615 OPS as a pinch-hitter, pretty clutch.
Chase Utley is still the best hitting 2nd baseman in the NL: I don't know if this is a fact, but he has a 134 OPS+ so far and has a team-high 5 HR
Positive Prediction for May: Ryan Howard hits more than 7 HR this month...write it down.
Negative Prediction for May: Roy Halladay goes on the DL.
Realistic Prediction for May: The Phillies go .500.