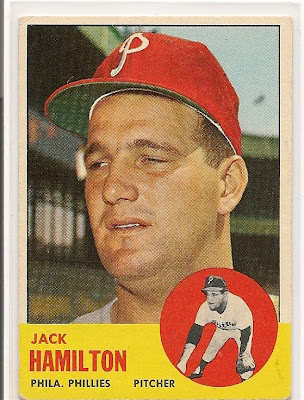 Jack Hamilton has a secret and it's hidden behind one winked eye.  He knows what's coming.  Why would he know and other people may not?  Well, it's probably because someone told him.

Ok, it's not that secret at all.  It's now the midway point of the season....and that can only mean one thing....copious amounts of BBQ and fireworks!

At least in the baseball seasonal rhythm, there's one other tradition that has been around since 1933.  That would be the Midsummer Classic.  'This time it counts!"

Before, it was the ultimate expression of league pride and symbol of superiority (and it still symbolizes that to a degree).  The National League won last year for the first time since 1996.  There was a time when the NL won every year but two from 1963-1985.  Now, the winner determines home field advantage for their league's representative in the World Series.

The official baseball people say it was to drum up interest.  But everyone was still interested when there was an outcry with the tie in the 2002 version of the game.  Interest in voting with access to internet voting has never been higher.  Millions and millions of votes are cast.  The only election with more is American Idol.

Here was my ballot, my criteria are not entirely related to who's performing the best this year, but who I want to see play:


And the reason why this criteria exists for me and my ballot is simple.....I am going to the All-Star game festivities this year!  I have the tickets for all the events.  I will take as many pictures as I can so that the full experience is captured.  It will be excellent.

If anyone else is going to be in the Phoenix area, I have many extra Fanfest tickets for Monday, July 11.  The Fanfest is a cool experience....kind of like a mobile baseball mecca.  Not quite as reverence-inducing as Cooperstown, but more interactive on a personal level.

And if you see someone running out on the field during introduction of the lineups....it won't be me.
Posted by Dan at 4:58:00 PM No comments:

I have a sickness....and the only cure is wood-grain textures. Seriously, what is the allure of the card aisle at Target? It's always a mess, there's packs at full price. I don't how many Pokemon I can name from the wrappers, but it's definitely more than three.

I got this for the promise of black parallels and to observe the awesomeness of the 1962 Topps card back and the realistic cartoons. 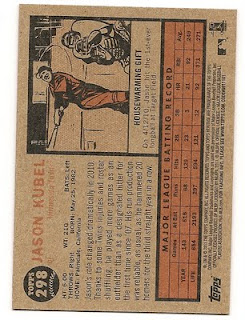 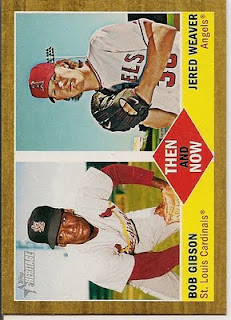 C22 Chrome Brad Lidge 0974/1962-If this doesn't say '60s to you, I don't know what does. Lidge seems to have fallen into a sea of bottom ocean plankton.  I kid, I love Heritage chrome cards. 391 Martin Prado AS-I really like how there's some all-star cards that aren't shortprints in this year's edition.  The Sporting News did rule the discourse (and provide some of the only out of town boxscores) 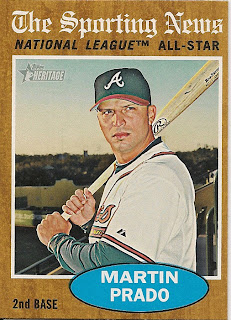 92 Armando Galarraga
327 Jose Lopez
384 Oakland Athletics
138 The Famous Slugger-This card is interesting because the text on the back talks about his 1925 season, his worst year as a regular Yankee.  This may be the year of the stomachache heard 'round the world (or it may be 1922) 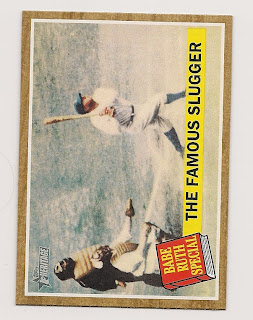 449 Elvis Andrus SP-1 down, 74 to go...that I will never attempt. Elvis looks happy to be a defending AL champion. 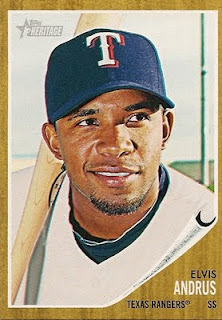 Black Parallels-the raison d'etre for the purchase.  Jennings should be making an appearance in Tampa soon.  I mean, will Justin Ruggiano hold back this prospect wunderkind?  I haven't heard from Pelfrey lately; I think he's hurt.  And the always popular (for Phillies fans) Clifton Phifer has pitched two straight complete game shutouts, which he needs to the way the offense has performed....not that I'm complaining. 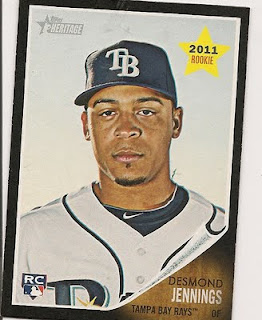 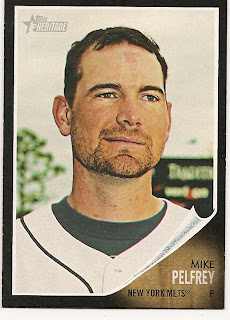 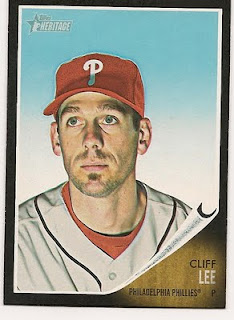 Back in the Saddle Again

With June comes the summer swoon.....

News and Notes from Around the Collection

I've nearly completed the first phase of my Phillies Project.  I'm down to one card to have every rookie and card in a Phillies uniform from the 1980 World Series team...the 1965 Topps Tug McGraw.  Of course, I'm never getting that 1963 Topps Pete Rose...follow-up efforts were fruitless.  So, I'll just use the redemption card for awhile.   The second and third phase are also coming along nicely....anyone have 1972 Topps HI #s of Phillies?

2011 Bowman pricing trends have been pretty wild since its release.  It's funny because the Bryce Harper train is on the same track.  Two days before release hobby boxes were at $68, they then reached a peak of $92, and have now settled back into the $75-80 range.  Chasing autos and refractors of prospects is so hypnotizing, the initial hype always blinds the voice of the conscience to not jump on the train when prices are rising.

Re: the previous item....I am very guilty of it.  I have my Bryce Harper chrome rookie and base rookie with perfect corners and they will pay for....... a dinner at a restaurant someday.

Sometimes I feel like a magpie when collecting cards.  The Diamond Stars inserts from Topps series 2 are over the top shiny, but  I covet every one of them and want to hoard them in my sock drawer so that no one else can take them.  And then I will get spoons....

I have opened more boxes in this last month than in the last 6 months combined.  I finally decided having unopened boxes sitting in my collection cabinet was a burden of anticipation that I couldn't handle anymore.  All are now freed from their foil and mylar prisons and will now revel in the darkness of the cabinet!

Conversely, I haven;t scanned anything in months and months.  Part of that is my scanner is wireless and so I have to be in a different room from the computer to scan stuff.  The other is that laziness wins.  Also, I want a scanner bed that can do more than 9 cards at a time.  Tedium at its finest.

I am really excited for the Ginter this year.  Why?  Because I can continue my streak of eventually completing all the Ginter sets.  I have 2006-2009 and still working on 2010.  Wantlists.....are still not updated.  I think I need 30 cards or something.  Curse you hand collation!

Speaking of....I'm going to go a different way here and have decided I really dislike collecting Topps Heritage.  This may not make sense, but I really, really like this year's set, but I want nothing more to do with it.  It's so tantalizingly pseudo-vintage with dreams of retired players' jerseys, stamps, and a mint collection coin.  But I will never complete the set in a million years, not even with a 30 shortprint headstart (ok, I actually only have 4 in real life).  Without completion, there is no meaning.  Therefore, Topps Heritage has no meaning....kind of like this post.

I'm thinking of starting a set of the month club.  I don't know what we'd do except trade cards from that set and pontificate on how excited we were to find doubles in the same pack of 1994 Upper Deck.  On second thought, I wouldn't join any club that would have me as a member.
Posted by Dan at 4:51:00 PM No comments:

A Box of Generosity from Crinkly Wrappers

Sometimes the generosity of people who inhabit this virtual card collecting world astounds me. One such case a few months ago was the plea heard from the gentleman at Crinkly Wrappers. "Take these cards...and speak no more of it." I volunteered for a box of a "random assortment" of cards.  They were wonderfully random. 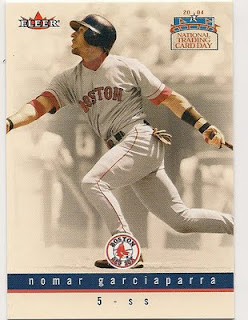 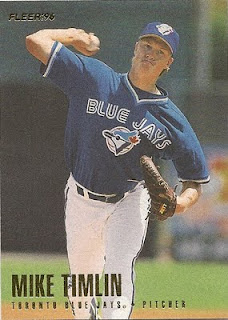 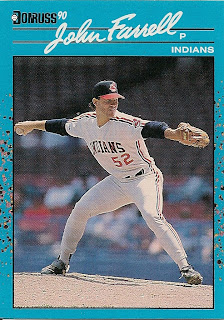 1990 Donruss Baseball Best John Farrell: Different colors do not improve the state of 1990 Donruss.  Witness this set or the green of the Donruss Rookies set from that year.....they're bright. 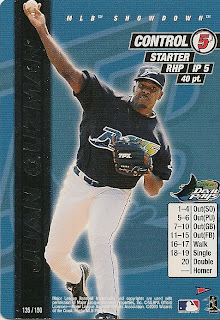 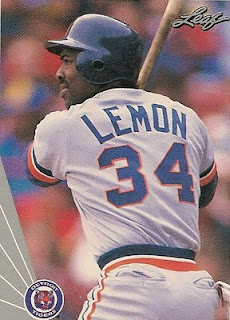 1990 Leaf Chet Lemon:  This is one set that I've never seen a pack of.  It was always just out of my reach.  The Frank Thomas rookie has always been a personal favorite of mine. 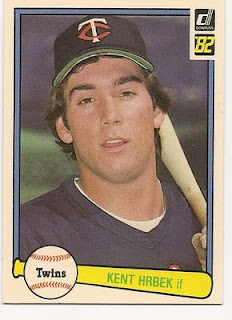 1982 Donruss Kent Hrbek rookie: Early era Donruss and the sheer strangeness of it always has fascinated me. 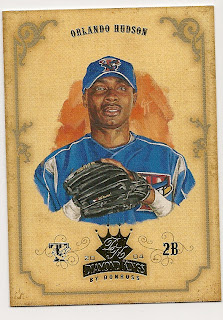 2004 Diamond Kings Orlando Hudson: The real issue with sets like this is that everyone can become a diamond king.  It lost its initial luster to compared to the originals like Gerald Perry, Pete Vuckovich, and Ron Darling....on second thought, the arcane rules for Diamond King inclusion from 1982-1991 created some strange choices. 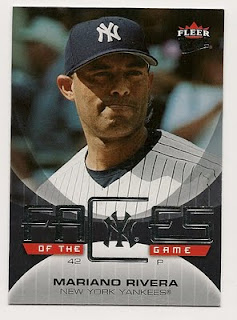 2007 Ultra Faces of the Game Mariano Rivera: Do you see the big "C" with the Yankees symbol?  That is for a jersey piece, what clever design. 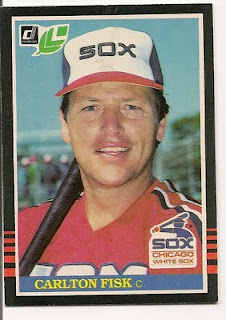 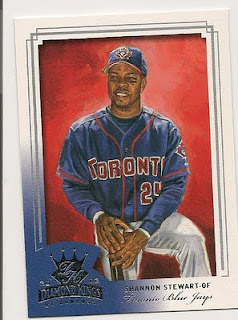 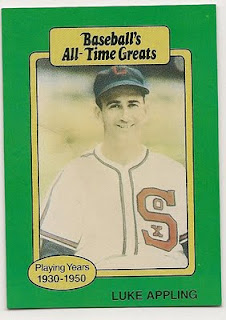 Hygrade Baseball Greats:  I used to have all of these as a kid, but I lost them.  This set is why I know the names of Ross Youngs and Addie Joss. 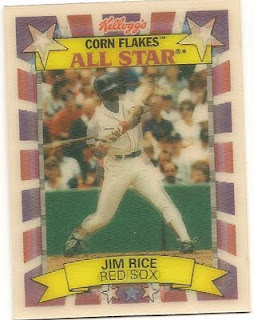 Kellogg's Jim Rice:  Who else loved to scratch their fingernails over the surface of these lenticular cards? 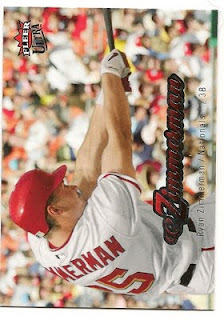 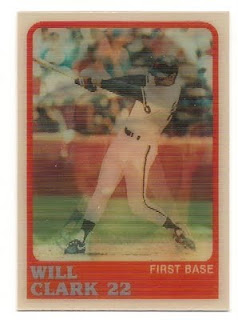 1988 Sportsflics Will Clark: "The Thrill" up close and personal, shadowed by the majestic arc of the left handed swing. 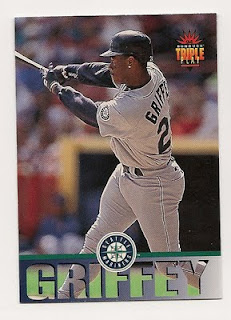 1994 Donruss Triple Play Ken Griffey Jr. : This used to be a set geared towards kids.  Look how nice it was....and simple...with an independent design.  I'm not sure what I'm trying to say here.... 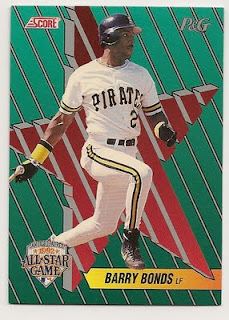 1992 Score P&G Barry Bonds All-Star: This set spotlighted all-star starters and reminds us of a time when the Pirates had an MVP on their squad.

This was just a small sampling of what was given in the random box.  It was really a great time to sort through and continue to sort through really.  Thanks Crinkly Wrappers guy!
Posted by Dan at 6:46:00 PM No comments: