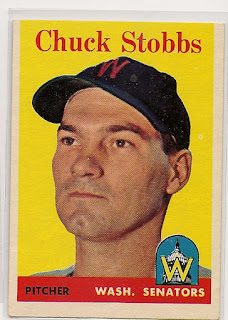 There are some years where you just don't have your stuff.  You can feel the ball spinning too much upward on the curveball or the sinker's downward gradient has decreased by 2%.  Chuck Stobbs experienced that in 1957.

One of the original bonus babies, signed by the Red Sox in 1947, he had been on a major league roster since the age of 17.  In those days, bonus babies (with signing bonuses greater than $4000) had to stay on the big league roster for 2 years or the teams could potentially forfeit their rights to them.  One prominent example of a bonus baby from that time period was Harmon Killebrew.

He made it through those two seasons and then became a reliable, mostly league average starter for many years starting in 1949.  It was during this internecine period that he threw the pitch that he's most remembered for.  He was the pitcher for the Senators when Mickey Mantle hit the record 565 foot home run (captured on 1961 Topps Baseball Thrills #406) out of Griffith Stadium in 1953.

His luck and ability turned for the worse in 1957.  He started the season 0-11, losing 11 of his first 12 starts, with 8 of those starts allowing more than one run per inning.  He was pulled before the end of the 3rd inning in 5 of those starts.

This streak culminated on June 14th against the White Sox, facing a lineup that included Luis Aparicio, Nellie Fox, Minnie Minoso, and Larry Doby, allowing 4 runs in the 1st and 6 runs in the 5th.  At that point in the season, his ERA was 8.90.

Turkey Red is an appropriate name for the Phillies this year. They wear red and have been a turkey of a baseball team. With the exit of Charlie Manuel as manager after nearly 9 mostly successful seasons, it's time to assess the responsibility for this fiasco of a season.

Well, we're going to rate the players in the checklist of the 2013 Turkey Red set to see how they've contributed. Now, the Turkey Red set is a curious offering. It purports to be a low-end offering, originally offered at the all-important benchmark of just over the cost of a blaster.

Speculators and mass buyers wanting the possibility of the auto fairy landing sellable autos under their pillow drove up the price quickly.    The prices doubled quickly, and now the supply is nearly impossible to find.  The ten base cards per pack are practically throwaways, slick reproductions that are a vehicle for sticker autos.

The Phillies had a fair representation in the 100 card base set, and it turns out the calendar of 2013 was an unlucky year to be chosen for the Turkey Red set.   Yet another claim to buttress the case that triskaidekaphobia is real.

All ratings are on a 1-5 Turkey scale. 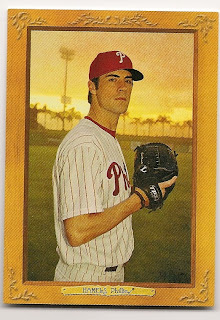 Cole Hamels, 3 Turkeys:  His won/loss record (5-13) doesn't tell the whole story.  His pitching has been fairly spectacular since the July 1 (1.96 ERA), but his April and May were pedestrian at best (4.80 ERA or so) and signaled the long season ahead. 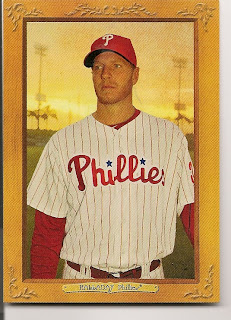 Roy Halladay, 5 Turkeys: He pitched injured and looked like it...going 2-4 with 8.65 ERA before going on the DL.  His lack of command and injury were the omen that the Phillies didn't need. 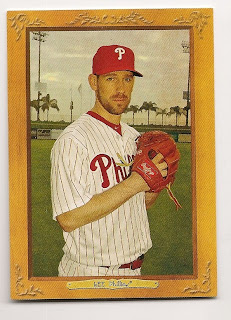 Cliff Lee, 1 Turkey: His overall performance (10-6, 3.19 ERA,5.59 K/BB) has been in line with expectations, but even he has not been immune to the 2nd half swoon, allowing 3 runs or more in his last 7 starts, which is too much for this team to overcome. 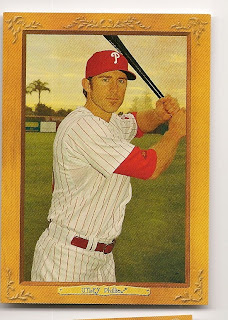 Chase Utley, 2 Turkeys: He has performed at an elite level for a 2nd baseman.....(128 OPS+) when healthy.  Still gives it his all, though definitely has lost a step when fielding. 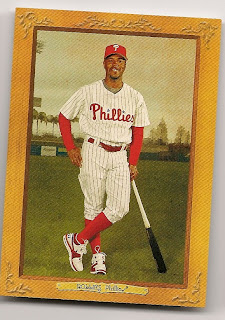 Jimmy Rollins, 3 Turkeys: He made a mistake in the Philadelphia media by saying he was playing to pad individual stats.  Unfortunately, the real problem has been that he's been  a terrible hitter this year (78 OPS+).  Since July, he's been hitting since Michael Martinez, 'nuff said. 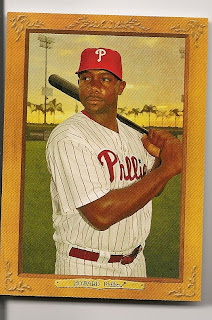 Ryan Howard,  4 Turkeys: His contract deserves way more than that, but that's not really his fault.  He also can't hit  lefties...for forever, and is still penciled as a clean-up hitter against them when healthy...also not his fault.  He's become a mediocre power hitter (.465 SLG) with a bad knee. 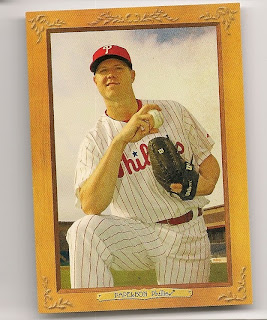 Jonathan Papelbon, 8 Turkeys: The scale was only to 5, but he needed more so the other 3 turkeys could be stuffed in his mouth.  Actually, he's been the best of a very bad bullpen...which doesn't say much.  He had too many blown saves during a critical stretch and is clearly declining....still a good closer, but not the elite one he was signed to be.