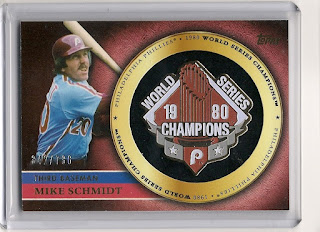 I don't understand this type of card, but I like it.  It has metal.  It's an embedded metallic representation of the happiest sports moment of my pre-life.

In all seriousness, though, did you notice that when these first started appearing in Topps sets that these were numbered /736 in series 1?  The numbering faded away, so we were left to guess how many were out there for 2012 series 2 and beyond.

There were 50 of these cards on the checklist inserted into 2012 Topps series 1 packs, which means there were 36800 pin cards inserted.  These were inserted either one per hobby case or six per HTA case.  Let's assume that there were an equal number of both HTA and hobby cases, this means there were 5257.14 cases of each, which is 10514.28 cases in total, which makes perfect sense.   Extrapolating this further, there were approximately 100,000 of each base card inserted into the total HTA and  hobby cases.   Multiplying that out, that means there are 33 million base cards in 2012 Topps series 1.  How many rooms would that take to hold them all?

The bottom line is that this pin card gives the owner the power of multiplication.  Pay no attention to the card behind the curtain!  It will divide you among your brand and team loyalties! And then you can't multiply your collection as it should be!

In a related note, I just finished taking a partial inventory of my collection.  It now takes up three cabinets and a bookshelf.  It's overwhelming.  I need a pin that says that "Overwhelmed collector.  World Series Champion of Accumulation: 2013"
Posted by Dan at 12:30:00 AM 1 comment: Links to this post

Hello intrepid readers of the card.  I have been looking around at group break possibilities and I've think I've found the one I'm looking for.

I've run only two group breaks (mostly because I don't have the time to put them together).  The one in 2011 was a success with a wide variety of boxes and participants.  The one in 2012 was also a success, though there were only 4 participants in the end due to the high buy-in (also it was almost all hits).

I think this will be a happy medium between the two.  Prizm basketball was an unqualified success and Prizm football was pretty warm received at the start. Baseball will probably be on the level of football, so it still qualifies as a "2012" product for some reason.  This means rookies of Darvish, Harper, Chen, Cespedes, etc....

There are 12 boxes per case with 20 packs per box and 6 cards per pack.  Each box gets two autos and three prizms (the chrome refractor of Panini).  There is an off-chance at a gold Prizm (#d to 10, probably 1 every 2 or 3 cases).

The checklist is a mixture of veterans, rookies, and retired players with an Elite Extra Edition insert/auto tie-in.

The slots will be by team.  I'm thinking a $25 deposit to hold down a spot, and then when the release comes next month, payment will be due in full.  The teams will be set up in tiers at the end (I haven;t yet figured out the tiers; they will be set up based on auto odds, # of cards in the checklist, etc).

Here's the link to the checklist for your perusal. Panini Prizm Checklist

Leave your interest in the comments for which team you would like and that will give you first shot at your team if the break happens.  Please don't send the deposit until I post again.  This is to gauge interest.

As a collector of all sets great and small, I have an undying desire to own all the little boxed sets labeled "traded", "update", "rookies", "rookie/traded", and so on.  This practice seems to have ceased entirely by 2001.  To my recollection, the last of this kind was the 2001 Bowman Draft Picks and Prospects boxed set. This ended the legacy originally forged by 1981 Topps Traded.

In the waning bronze age of the little boxed sets (defined as 1998-2001), there were some twists to get collectors to buy these little boxes that had no packs.  Fleer tried a strategy of nothing and it fizzled out after 2000.  Topps, though, decided upon its return in 1999, to try two new things:  they inserted an auto one per factory set and also issued a chrome version of the little boxed set.

But they made it so you had to choose....the lady (the auto) or the tiger (the chrome) and never shall the two meet within.

The answer is simple; I only buy the sets and I wanted the 1:80 chance at also receiving the Miguel Cabrera auto.  Call it the gambler's fallacy; I didn't know anyone else who had one, so I must be the 80th person in line.    The chrome version, though nice, costs nearly 2x as much set-wise and holds no (albeit slim in the other one) chance of receiving the auto. 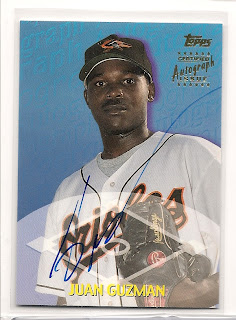 Juan Guzman  is the auto I received.  This is not the Toronto pitcher from the '90s.  He did not make the majors, but has a memorable auto. 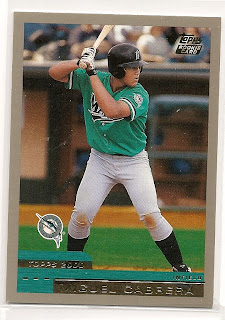 Here is the cornerstone Miguel Cabrera.  He may not have even been 18 when this photo was taken, but by the time he was 20, he was already projected to be a hitting star, culminating in the Triple Crown in 2012.

There were also other bonus rookies in the set that makes it a worthwhile add to a collection. 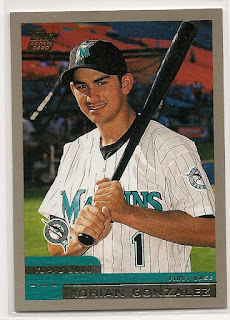 Adrian Gonzalez was the first pick in the draft that year.  He;s expected to carry the Dodgers this year, returning to the homer depressing stadiums of the west. 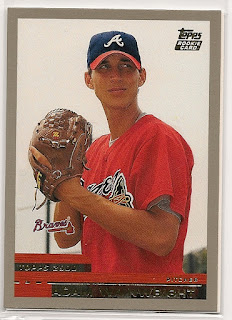 Adam Wainwright was one of the few Braves pitching prospects that became something after the Braves traded them.  Seriously, look it up....if the Braves offer you a pitcher in a deal, run away. 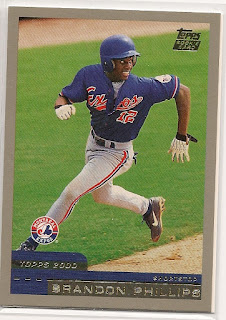 Brandon Phillips has been a quality 2nd baseman for many years with the Reds now. He was, of course, involved in that lopside Bartolo Colon deal in 2002 (along with Grady Sizemore and Cliff Lee). 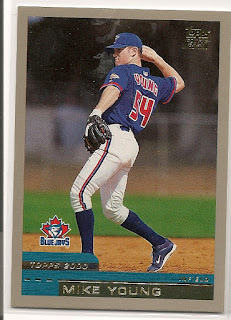 Lastly, the rookie card of the newest Phillies third baseman, Michael Young.  He was traded to Texas for Esteban Loaiza. and then became the Rangers all-time hits leader. Hopefully, he was one quality hitting season left in him.

There are other interesting rookie cards in the set such as Juan Pierre, Aaron Rowand, K-Rod and Rocco Baldelli.  The price has already spiked on these over the past year, but for the rookie card collector and mini-thrill seeker, it's a hearty addition to the collection
Posted by Dan at 9:28:00 PM 1 comment: Links to this post

What Creature Lurks in the Heart of Collectors

There are many nights of dreams that both tantalize and terrify. From what I can remember, I don't usually dream in 3 dimensions; it's kind of a hybrid shadow animation type of setting. I don't t think that cards are usually involved, but I'm sure that there were instances where I was trapped in a flat 4 cornered box and then coated with two layers of plastic so that my corners would stay intact. I guess it was either that or be a part of a bicycle wheel.....

As collectors, there are some ideas that can leave us sweating in terror or just want to lash out against injustice. Why don't we pull the cards that our collective telepathy clearly divines? Can you feel that the power of the draw of the wantlist card enables to choose our packs and boxes with ease? Use the power for good and you shall get everything you desire.....use it for evil, and well, you turn into your deepest, darkest creatures that lurk in your heart..... 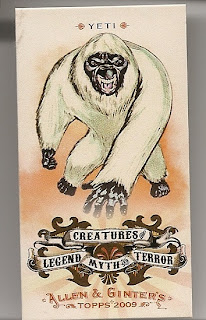 The Yeti: The traditional definition of a Yeti is a hairy beast of the snow in the Himalayas that is either a) an exiled employee of Monsters, Inc or b) a traveler from Planet of the Apes.  The Yeti for all collectors is the rampant disorganization of the collection.  Do you see that pile of that cards over there?  Those are the arms of the Yeti cradling you towards a snowy avalanche of cardboard.  Don't sweat it because the Yeti can track you by the beads of sweat you leave behind on your path of chaos.  In symbiosis with the Vampire. 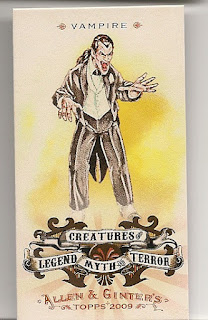 The Vampire: The traditional definition of the Vampire is an undead or immortal bloodsucker that either a) lives under the thrall of a giant castle in Transylvania or b) sparkles in daylight.  The vampire in the card collecting world is the manifestation of the never ending quest.  You are enthralled by the chase or the call of a set or a goal or a particular card and the hypnotic eyes of the vampire draw you in.  You don't even realize it's happening until it's too late.  Your green blood drips behind in varying pool sizes as the accumulation goal gets closer and closer.....and yet, still you thirst for more.  This will never be satiated.....and you don't have the power to turn into a bat, though your cards can live in a cave of sorts.  In contention with the Griffin for focus. 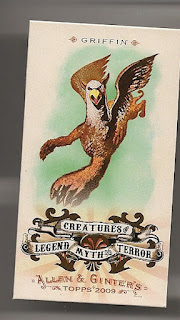 The Griffin:  The traditional definition of the Griffin is a) a winged half-lion, half-eagle creature that is fierce and honorable or b) the same looking creature that dances with lobsters.  The Griffin is the guardian of your collection and the defender of your psyche.   It is the one that will allow you to sort your collection and make it real in the sanctity of the inner collectors' sanctum.   Cards are treasures and the Griffin within protects them from UV light, little hands, evil eyes, and corner wear.  You will not abandon the collection; as it grows in value to the collector, the Griffin grows stronger.  If it replaces the Vampire in the heart, the collection will grow targeted and full of treasure.   Also can defend against the Yeti as it replaces the chaos with honorable organization.

What other creatures define the heart of the collector?  Which of these creatures fit most your style?
Posted by Dan at 12:34:00 AM 2 comments: Links to this post