Phillies Inkquest: A Re-Introduction and an Autograph Dead Zone List 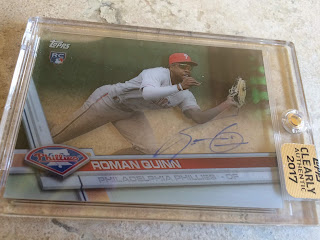 The Phillies Inkquest is defined the quest to find certified autographed cards of Phillies for the following categories: World Series participant, HOFer, all-star, team leader in a pitching or hitting triple crown category, and opening day starter from 1950-present.

At the beginning it wasn't so extensive, I really only wanted to focus on the World Series participants since there have been so few.  As I started collecting, I realized that wasn't the story that needed to be told through this collection.  Any Phillies fan or card collector should be able to sift through the players and know the history of the team and the story of the card brands that was able to make this a collection worth memorializing.

All certified cards are fair game for this collection.  That includes issues from all the major card companies of the past (Topps, Upper Deck, Fleer, Donruss, Pinnacle) and the present (Topps, Panini).  And I've also been mining the depths of the offerings from the not as mainstream brands (Leaf, Historic Autographs).

I will give my biased perspective from over three years of building this up; this collection at the end will be spectacular and the crown of my usually unfocused collection.  I've dug up some hard to find cards of hard to find players, mostly of the cut signature variety, and been able to secure them.  There are definitely more than ten 1/1 autograph cards here and many others numbered to 25 or less.

I hope to share all my collection with you as I remember what it is to type on a blog (my activity has definitely been wanting here over the last few years).   For the posts that detail what has been posted so far, please follow this link.

I am now entering the phase where it is becoming more difficult.  As of this writing, I need 126 autographs of players for the core collection (yes, there are auxiliary pieces not mentioned here; it would require a flow diagram to show all the branches that intersect).  Some of them I have not yet purchased because of price considerations, others because of paralysis of choice, and others because I have not been able to find an autograph of them available to date.

Those without an autograph available (to my recollection) are players in what I would call the Autograph Dead Zone.  It's as if they haven't ever signed a card, though that may or may not be true.  There are two possible reasons to be in the Autograph Dead Zone.  One is that the player passed away prior to the influx of autograph issues (prior to 2000) and wasn't popular enough or HOFer enough to secure cut signature autographs in various sets, and the other is players that just never seemed to put pen to card even though they had their fan bases (these can now be considered prime choices for new Topps Archives issues).

Below is a list of the top 10 players who I think are in the Autograph Dead Zone in reverse chronological order.  Any information on a checklist for these players of an autographed card would be appreciated to help narrow my search.

10. Bill "Swish" Nicholson-a perennial all-star for the Cubs in the 1940s.  He was also a member of the 1945 Cubs, the well-known next-to-last World Series team of that franchise.  I figured all major Cubs would have an autograph issued.  He played on the Phillies from 1949-1953.

9. Don Demeter-a good player over his 11 year career.  He is best known for being a principal contributor on the 1959 champion Dodgers.  He played on the Phillies from 1961-1963.

8. Bob Uecker- more known for his off-field career as an announcer/actor.  Where was his Major League-related signature?

7. Dave Cash- a durable second baseman throughout his career.  He held the record for plate appearances in a season (if my memory serves) at one point.  He also was a three time all-star and key contributor to the 1971 champion Pirates.

6. Bob Walk-remembered by Phillies fans for starting game 1 of the 1980 World Series.   He was on the Pirates for a long time, including those oh-so-close teams of 1990-1992.  This must be a bias against PA-based players then.

5. Bo Diaz- a solid two-time all-star catcher over a 13 year career.  He played for the Indians, Phillies, and Reds and was the main catcher on the 1983 Phillies pennant winners.  His inclusion is because of tragedy; he passed away from a home accident in 1989.

4. Danny Jackson- a pitcher with World Series appearances for multiple teams.  He could be considered a principal part of the 1985 champion Royals, 1990 champion Reds, or 1993 pennant winning Phillies.  He also had one recognizably great year in 1988 overshadowed by Orel Hershiser.

3. Todd Zeile-the ultimate journeyman, playing for 11 teams in 16 years.  He was a contributor for all those years, totaling over 250 HRs and 1000 RBIs.  He made the World Series in 2000 with the Mets.  Where's his Subway Series Autograph card?

1. Cesar Hernandez-he's been the opening day 2nd baseman for the Phillies from 2016-2018.   He's the only multiple year opening day starter this decade from the Phillies not to have a certified autograph.

Dang. Not sure if I knew about Bo Diaz passing away in 1989. Totally remember from back in the day.

Anyways... I love this project. If you expand to PSA/DNA or BGS slabbed cards you might be able to cross a few of the Autograph Dead Zone cards off of your list.

Bob Uecker's (and all) 1967 cards have autographs.

If you don't have that card, you can find it on my blog.

Just curious about your collecting only certified autographed cards. Is it so that you know for certain it is authentic? And if that's why, would you add cards to your collection if you had them signed in person yourself? I have maybe 500 signed Phillies cards in my collection, and while I like to have certified cards, if I get one myself that is perfectly fine for me as far as authentication. Of course, certified cards hold their resale value better. (I also only get Phillies cards signed--but I will use Phils minor league cards as placeholders or, in the occasionally case of there being no major league Phils card, as the real thing.)

My name is Darci Lyne. This is a very happy day of my life thanks to the help that Dr. .nosakhare has given me to help me recover my ex-husband with his spell of love and magic. I was married for 6 years and it was so terrible because my husband was really cheating and looking for a divorce, but when I came across Dr..nosakhare email on the internet about how he has helped so many people get their ex back and help fix the relationship and make people happy in their relationship. I explained my situation and then I sought his help, but to my greatest surprise, he told me that he would help me with my case and that I am now celebrating because my husband has totally changed for the better. He always wants to be by my side and can not do anything without my present. I am really enjoying my marriage, what a great celebration. I will continue to testify on the Internet because Dr..nosakhare is a true spell caster. NEED HELP? CONTACT
-Email- blackmagicsolutions95@gmail.com
you can also add him on Whats-app: +2349083639501
He is the only answer to your problem and makes you feel happy in your relationship. And it is also perfect in your relationship.
you want your ex back?
want a love spell for a new lover?
Childless problem solution?
Financial problem solution?
Weak Erection & Quick Ejaculation?
solution to sickness and diseases of the body
All type of problem solution by astrology?
Divorce problem solution?

THE ONLY TRUE HACKER IN THE WORLD ® said...

INSTEAD OF GETTING A LOAN,, I GOT SOMETHING NEW
Get $5,500 USD every day, for six months!

See how it works

Do you know you can hack into any ATM machine with a hacked ATM card??
Make up you mind before applying, straight deal...

Order for a blank ATM card now and get millions within a week!: contact us
via email address::{Universalcardshackers@gmail.com}

We have specially programmed ATM cards that can be use to hack ATM
machines, the ATM cards can be used to withdraw at the ATM or swipe, at
stores and POS. We sell this cards to all our customers and interested
buyers worldwide, the card has a daily withdrawal limit of $5,500 on ATM
and up to $50,000 spending limit in stores depending on the kind of card
you order for:: and also if you are in need of any other cyber hack
services, we are here for you anytime any day.

Here is our price lists for the ATM CARDS:

make up your mind before applying, straight deal!!!

The price include shipping fees and charges, order now: contact us via
email address:::::: {Universalcardshackers@gmail.com}
Whatsapp:::::+31687835881